I have another review up on Book Binge, this time for Lovers Unmasked Anthology, a Halloween-themed anthology featuring authors Katee Robert, Cari Quinn, Tessa Bailey, and Samanthe Beck.

Another one of my reviews is up on Book Binge today, this time for Just One Night by Lauren Layne. I didn’t love it, but I didn’t hate it either. Check it out!

Another review of mine up on Book Binge!

Book Binge Review: Do or Die by Suzanne Brockman

New review of mine up on Book Binge, this time of Do or Die by Suzanne Brockman. Take a look!

Check out my review of the novela One Night in Santiago on Book Binge!

Long time no see! I started this blog with the intention of reviewing everything I read that I’m not reading for review on Book Binge. But then the crazy part of the fall semester rolled around and I wasn’t reading or reviewing anything for anyone. Then 2014 started and on the rare occasion I was able to squeeze in reading that wasn’t for Book Binge, I just didn’t have the energy to write up a review for my own blog. So, here we are at the end of Febrary 2014 and I’m just now returning. Pretty lame.

I’d like to try and get reviews up on here semi-regularly, if only because I genuinely do love talking about the books I read. I have some personal craziness coming up later this year so I’m not sure how long I can sustain it, but my goal is to do a better job with this blog. Wish me luck. 🙂

Review: Lost to the Desert Warrior by Sarah Morgan 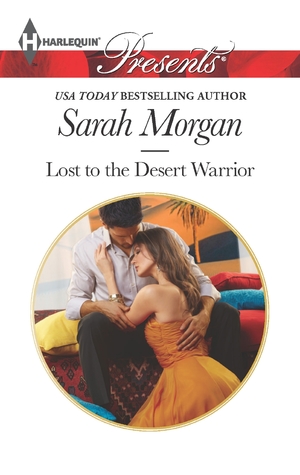 For Layla, princess of Tazkhan, her arranged marriage means one thing: a lifetime of cruelty and captivity. Such an unendurable prospect drives her to throw herself at the mercy of Sheikh Raz Al Zahki — her family’s greatest enemy!

Raz demands one thing in return for the safe haven Layla is seeking — this brooding desert king wants to make her his queen! Her freedom might be secured, but now her heart is at risk, for soon she’s lost to the scorching heat of their marriage bed. However, it will take more than fire to thaw her guarded husband.

I’ve long heard about how wonderful Sarah Morgan is, but I’ve resisted reading her books simply because I am not usually a fan of Harlequin Presents, where Morgan writes most often. The sheiks and Greek billionaires just don’t ring my bells! The other day I was in the mood for some complete and total fantasy, however. I wanted nothing that resembles my life or its real problems, and I wanted something short that I could read in one afternoon. I decided to give Lost to the Desert Warrior a try, and boy am I glad I did.

The story is about Layla, the princess of the fictional Persian-esque country Tazkhan. Layla’s evil father the king has died, and his even evil-er cousin Hassan plans to marry her to help him secure the throne. Hassan is a straight-up psycho villain, and Layla is desperate to escape marriage to him and to avoid her younger sister being sent away (which sure doesn’t sound so bad compared to Layla’s prospects). The sisters concoct the plan to immediately flee into the desert night to try and find her father’s mortal enemy and rightful ruler of Tazkhan, Sheikh Raz Al Zakhi. Obviously this is a foolhardy and poorly planned journey, but rather than feeling ridiculous it just served to highlight the sisters’ absolute desperation. They know they might be captured, lost, or even killed, but it is still preferable to a forced marriage to Hassan and to having him become king, which would obviously be terrible for the entire country.

On their journey, Layla gets thrown from the horse, and her sister gets carried off into the darkness. Layla is, conveniently, picked up by Raz’s men and delivered straight to her target. She presents her plan to Raz: he marry her so as to strengthen his own legit claim to the throne and foil Hassan’s plans. Raz is, understandably, pretty mistrustful of Layla and her plan. He hates her family, not only because the king stole his throne but because he was responsible for the death of Raz’s much beloved wife, who died in a sabotage attempt meant for Raz. Layla knows this history and knows that Raz deeply loved his wife, so she makes it clear that she’s not looking for love or power, only respect and safety, for her sister, herself, and her country. Despite his mistrust and his vow that he’d never marry again, he realizes that marrying Layla would indeed be best way to secure peace for Tazkhan, so he agrees.

By far the best part of this story was Layla. Raz is great too–he is, of course, kind, patient, and exceptionally insightful–but Layla’s journey was really the heart of the book. At first Raz assumes she is just a spoiled, ignorant princess, but it’s immediately apparent that her story is much more complicated. In fact, Layla was completely ignored by her father and treated horribly by Hassan. She wasn’t allowed a life outside of the palace, wasn’t given even an ounce of concern or affection, and was subjected to some pretty horrible shit. Instead, Layla learned about life through reading. She’s exceptionally practical and applies logic to all that she does, and she has a heightened ability to anticipate others’ feelings and empathize with them. Other than fear and love for her sister, though, she’s never really experienced any other emotions. She’s never participated in life, so for her, marriage to a decent human being like Raz comes with an unprecedented amount of freedom. Seeing her learn what that means and experience life for the first time was delightful.

Layla is in a very difficult situation–Raz’s people mistrust her and her motivations. Raz is suspicious and has trouble putting his first wife behind him, even though he and Layla are burning up the sheets. Hassan is actively hunting her. Plus, her only friend in the world, her sister, is still missing, though Raz’s brother is trying to find her. She’s alone in a hostile place with very little idea of what is expected of her in the marriage. If I were her, I’d be feeling all kinds of sorry for myself, but Layla does not. She works hard to prove herself to Raz and the others around her, and she tries to find her own place without trying to take anything away from Raz’s first wife. She’s no Mary Sue, though. She stands up to Raz, quite forcefully in fact, when he’s in the wrong, and she admits that she has a lot to learn. Her journey from somewhat detached (which was her coping mechanism) to passionate (because she felt safe with Raz) was fascinating, and it was easy to see why it entranced Raz so much as well.

It seems like I’m gushing over this book, and I guess I am, mostly because it was much more than I expected. Still, it’s important to read this book as a fairy tale, because if you start to think of it as a contemporary romance it falls apart. There’s a bit of fetishization of Persian culture, with sexy, luxurious tents, a picture perfect oasis in the desert, etc. There are outdated ideas–marriage to secure a throne, virginity of a new bride, etc.–but then characters go to the day spa and ride in planes. It’s a little disconcerting, but as long as I was looking at this as a universe wholly separate from my own, I could ignore those contradictions. I would have liked to see a little more of Raz’s struggle to let go of his first marriage, though. I felt like that was a big, insurmountable conflict at the beginning, but it just sort of faded away without much drama near the middle. A little more from Raz would have helped resolve that issue further, at least in my own mind.

Bottom line: I thoroughly enjoyed Lost to the Desert Warrior, and it’s a good example of why I should sometimes push outside my usual reading comfort zones.

Note: I purchased this book myself for review.

reading for love
Blog at WordPress.com.